As mentioned in a recent post, we found a colony of Cinnamon Weavers at Wad Madani on Friday. As there appears to be almost nothing published on this species, I will post some pictures and something about the colony. I have posted some photos previously of a male, what was probably a female, and what were probably moulting males. However, the photos below are better quality and show the first ever confirmed photos of a female of this species. I intend to make a thorough study of this colony over the next couple of years and publish something more formally, so please do not re-publish any of these data without permission. 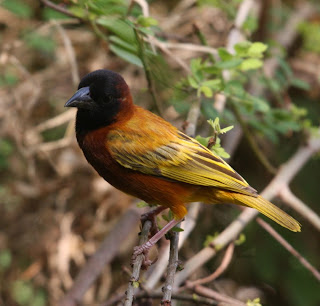 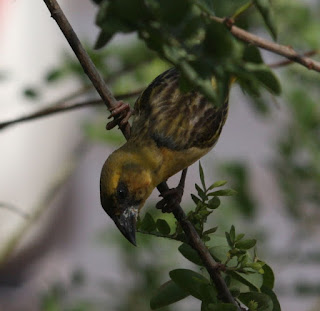 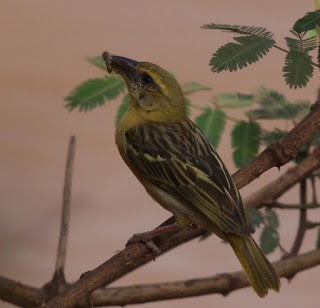 The nests were located right beside the Blue Nile with several, but not all, overhanging the water. They were located in the grounds of a cafe, but in a location that is almost inaccessible. The main cafe building goes right up to the river with about 1m of land between it and the steep bank down to the water. On either side of the building is a fence that stops people moving along the edge of the river through to another cafe on the other side. This provided a small enclosed section of about 4m of river bank that is closed off on either side. This must provide quite a bit of protection against disturbance. We only noticed the colony because we saw a bird flying in with nesting material. It was only by standing on crate that it was possible to peer over the fence and take a few photos. There were 7 nests in this section and one other that was visible on the other side from the neighbouring cafe. It is possible that there may have been a few others that could not be seen. Three of these appeared to occupied; one was being built, one had young and the other could not be seen well enough but had a male and female nearby. 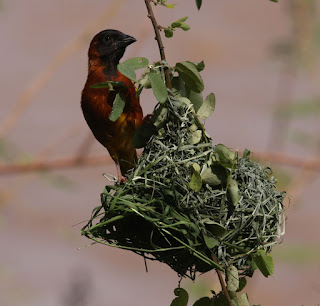 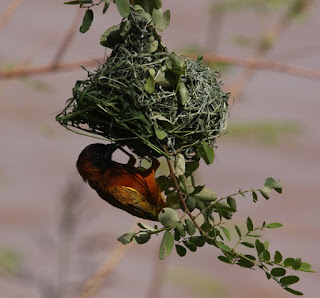 The bird above was actively constructing its nest and spent long periods working at the nest with its bill, but did not appear to bringing in much new material. At one point a female arrived and he stood on a branch vibrating his wings while the female entered. He then went up and half entered the nest before hanging below the nest and vibrating his wings again, in a similar behaviour to what I have seen with other weaver species. The female exited and left. There was no mating or direct interaction between the two. I got the impression that this might have been a nest inspection by a potential mate. 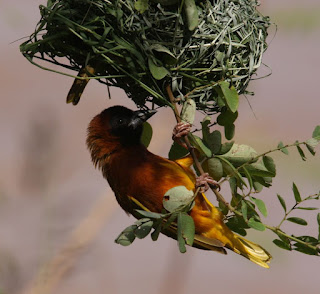 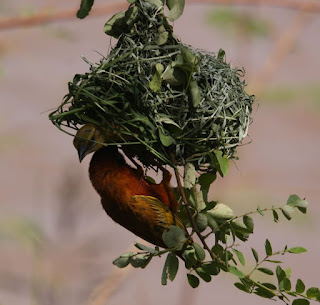 About 1m from the green nest under construction was a second active nest that was clearly older, with dry light brown grasses. On several occasions a female flew in carrying food to feed the young. It returned every few minutes. As can be seen from the photo, it never entered far into the nest, making we wonder if the young might be quite large. The entrance was on the far side and could not be seen. As can be seen in one of the photos above, the young were being fed insects.  As with most seed-eating species, the young are fed on insects because they need the additional protein for growth. 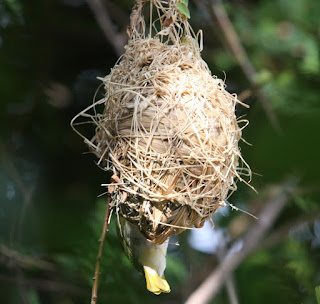 Other than the one under construction, all nests were made from dry grasses and were similar to the one in the photo above. There appeared to be no activity at 5 of the nests, but we only watched the nests for about 40 minutes or so and there could be something we missed; for example there could be incubating females. Next week I hope to get in closer and peer inside all the nests to see what is happening and get better quantitative data. I imagine that I will have plenty of opportunity here for an interesting project.