A mix of new birds at Wad Medani

Terry visited Wad Medani back in July and saw some different species to what we usually see in Khartoum, such as Ruppell's Starling and Cinnamon Weaver. For this reason, Terry, Stephen and I decided to make another visit to see what we could find. I was particularly interested in locating the Cinnamon Weavers in the hope of finding a suitable colony for a study. The drive down of 180km took about 2 hours, and we saw some interesting birds, with lots of Pied Crows and one large group of Northern Carmine Bee-eaters, both species not usually seen further north in Khartoum. On entering town we went straight to the area where Terry had seen the Ruppell's Starling and quickly saw one of our own; it headed into an area of thick vegetation that turned out to be a cafe with a well shaded garden (located on the main road beside the river next to a gas/petrol station at N14.41 W33.52). 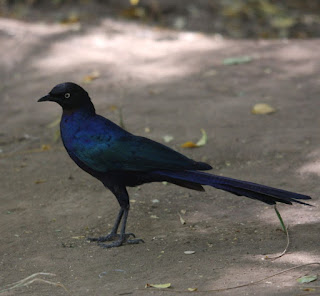 It didn't take long to realise that we had lucked into a good spot, not just for the availability of a nice cup of coffee and a seat, but for a nice selection of birds not seen by us previously within the new boundaries of Sudan; the starling being the first seen here by either Stephen or myself. We then had a nice surprise when a male Black-headed Gonolek lit up the cafe garden with its bright red underparts. This was quickly followed by a group of Speckled Mousebirds. Both were new birds for Terry and Stephen and my first sightings in Sudan. A Wryneck then put on a brief performance and we also enjoyed watching some Red-cheeked Cordon-bleus. 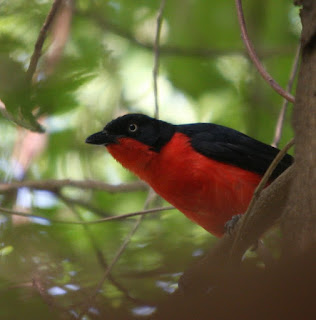 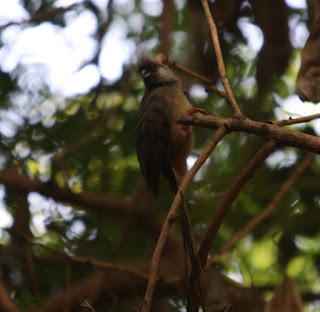 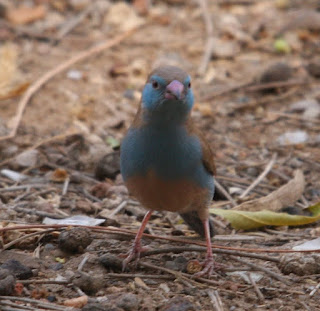 For me, the highlight of the visit was finding a colony of Cinnamon Weavers right in the Cafe Gardens and in a location that will be perfect to allow me to do a study. I will write about them in a separate blog. We then stopped briefly at a second location a couple of km further north where Terry had seen the Cinnamon Weavers on his previous visit. There were none around, but there were some shrikes and this Vieillot's Barbet. 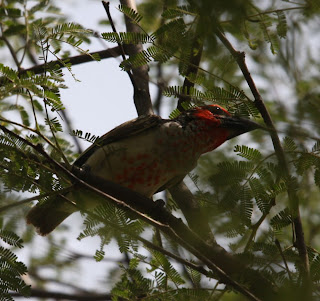 We headed north and after 35km noticed some nice scrub habitat on the right. It was already past midday and a bit late for birding, but we stopped off to have some lunch and check out the birds. We commented on how much more 'African' this habitat appeared than further north, and it reminded me a bit of the habitat around Juba in South Sudan. There were lots of birds calling, including a pair of Black-headed Gonoleks, but it was hard to see many birds in the short time we had. There were some Red-backed and Masked Shrikes, some Black-rumped Waxbills, a Yellow-breasted Barbet, some Marabou Storks overhead and lots of sunbirds of both the main species. Best bird here, though, was an Olive-tree Warbler, which is the first I have ever seen. Unfortunately, it didn't hang around long enough to be seen well or photographed. This is definitely a site worth returning to, as I feel it has a lot more new species for us to find.
Posted by Tom Jenner at 00:20