Last Saturday, I went to Um Dum (15°32.164’N ; 32°37.283’E), on the east side of the Blue Nile, a place I already visited last year in May, and found interesting with a small island reachable via a long beach in the middle of the Blue Nile.
The Nile went down, compared to the beginning of the month but unfortunately it was still too high to reach the island and the beach by foot. This was really a shame as a lot of birds could be observed flying above the island but on the other side, and were thus too far to be all identified: among them at least about ten sacred ibis and a few pelicans. It looked like they were chased or disturbed by something unidentified on the other side of the island.

The beach was largely flooded but some sandbanks still emerged. On a sandbank on the opposite side of the Nile, a group of about 50 grey herons were resting: among them pretty sure there were a few black headed herons (but hard to see from so far), some Abdim storks, 4 pelicans (probably pink-backed) and one stork which really looked like a yellow-billed stork.
Some plain martins and palm swifts were flying around.
A lot of gull-billed terns were flying above and landing on the same sandbank. 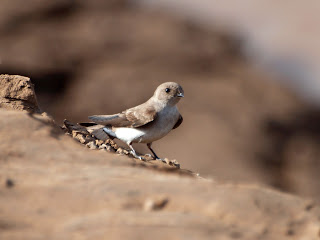 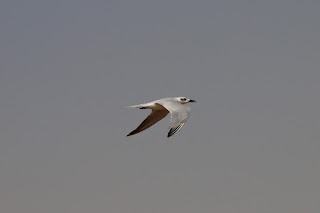 On the bank of the Nile, I could observe wood sandpiper and common sandpiper, some Egyptian plovers and some spur-winged lapwings. 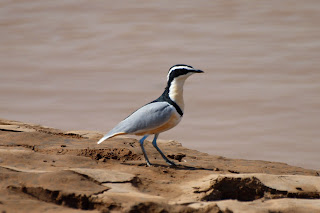 As for passerines, I observed willow warbler, graceful prinia, a male pin-tailed widah (non breeding plumage), two crimson-rumped waxbills and to be noticed, a single yellow wagtail among a group of crested larks, which was my first one of the autumn. 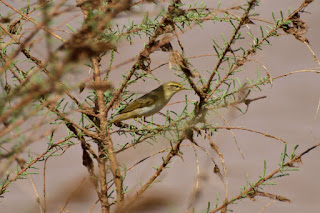 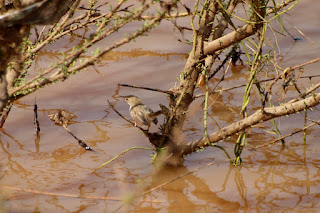 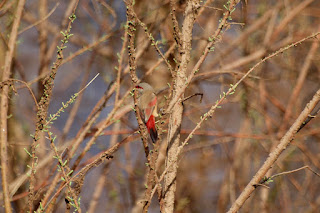 Crimson-rumped Waxbill, Um Dum 22nd September 2012
The day after I decided to go back to this site but to observe the sand bank from the other side of the Nile. Unfortunately from the west side of the Blue Nile it is difficult to walk along the banks of the river because of the fences everywhere.
I found a first place to stop at 15°31.064’N ; 32°38.111’E which was rich in little swamps and where I could observe black-headed herons, common wood and green sandpipers, two squacco herons and one little egret and of course the spur-winged lapwings. Besides this I observed northern red bishops, little bee-eaters, village weavers, abyssinian rollers and blue-naped mousebirds. 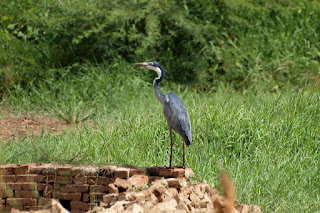 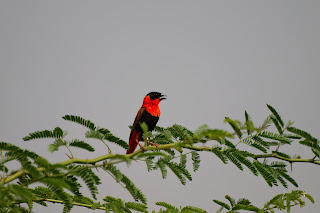 Then I moved a bit more to the north to try find the sand bank and finally find it at 15°31.064 N ; 32°38.111 E. The group of about 50 herons was still there, and I could confirm the presence of black-headed herons, grey herons, and abdim storks, but there were no pelicans or yello-billed storks anymore. A lot of gull-billed terns were resting in this sandbank and I could observe a few white-faced duckling which were not visible the day before. Besides this I could observe some greater blue-eared starlings and one black-eared wheatear. 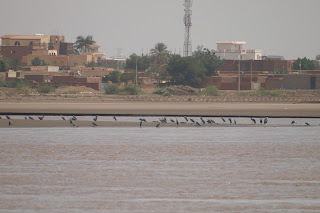